Dog Rescued After 8 Days on Mountain

Colorado – An abandoned German Shepard, Missy, was found trapped under rocks and badly injured on a Colorado mountain. Her guardian had left her on the mountain during a storm eight days before and never returned for her. Now Missy’s guardian is being charged with animal cruelty, yet still wants his dog back.

The owner of an abandoned German Shepard discovered by hikers along a craggy Colorado mountain has been charged with cruelty to animals, the latest twist in a highly charged battle over who will gain custody of the pet.

Hikers discovered Missy, whimpering and bleeding, between some rocks on Mount Bierstadt, a 14,000- foot peak mountain in Clear Creek County, Colo. By the time a team of volunteers rescued her days later, she has been trapped there for eight days.

“The criminal charge of cruelty to animals had been filed against the dog owner, Anthony Joseph Ortolani,” according to a brief statement released by the Clear Creek County Sheriffs Office. “The next court appearance date for Mr. Ortolani is October 16.”

Missy was turned over to animal control officials at the Sheriffs Office after her rescue, but Sgt. Rick Safe said a veterinarian clinic has been taking care of her because the severity of the animal’s injuries. She was severely dehydrated and had numerous lacerations when she was brought in. She also needed antibiotic for cut related infections, he said.

“She’s going to make a full recovery, : Safe said. “The dog is happy. The vet says she’s fantastic and is doing great.”

Missy was discovered last Saturday August 11, by a couple hiking Mount Bierstadt. Because of the dogs weight – they estimates she weighed at least 100 pounds – they patched her bloody paws with bandages from their first aid kit and left her on the mountain with some water.

They returned home and sought help on an online hikers forum, 14ers.com. One of the hikers, Scott Washburn, assembled a team of volunteers and the group headed up the mountain on Monday morning, according to the long thread from the forum. The group found Missy, her wounds reopened, and blood all over the rocks surrounding her. 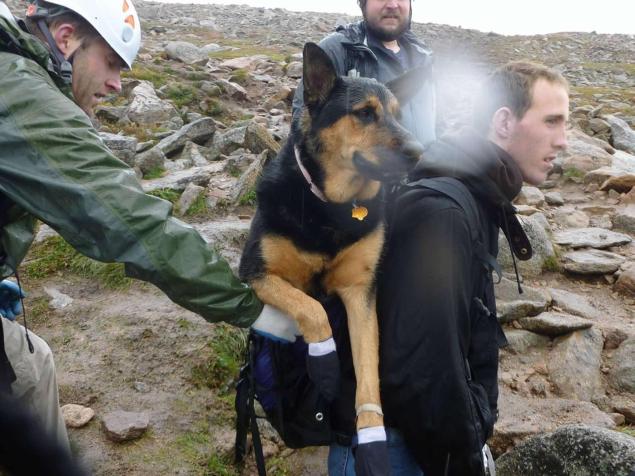 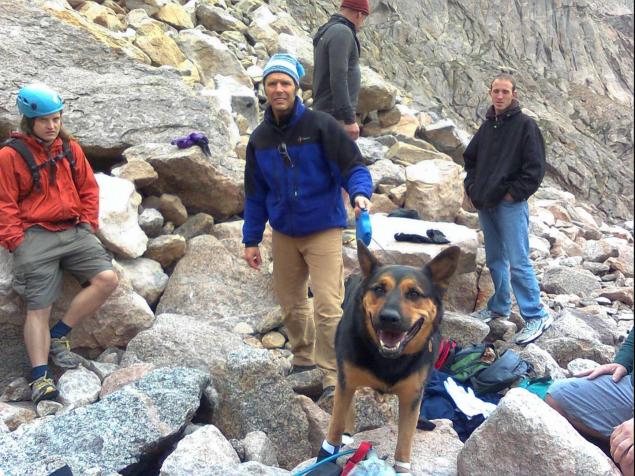 The dog was transported back to the ground in one hikers oversized back pack after an all day rescue mission. Pictures of the rescue also were posted on the online forum.

After Missy’s owner was identified as Ortolani, angry posts sparked a discussion so heated that the site administrator locked down additional comments.

Among the earlier posts was one from Ortolani, who said he was forced to leave Missy behind after a storm moved in and he had to protect a yound hiker under his care.

“I am not proud of leaving Missy. I did what I thought was right at the time to protect myself and the teenager that I was with,” he wrote. “People say that I should have stayed there and sent my friends son to get help. I was responsible for him, I was not leaving him there alone with the clouds growing over Bierstadt, and I was not going to send him off alone with absolutely no cell service. ”

He said he called the Sheriff’s Office for help. Safe confirmed the office received his call on Aug 5th, but told him they did not have the man power or equipment to conduct a search and rescue mission for the animal.

Ortolani said he then looked online for anyone who might have found Missy. When he didn’t see anything, ” it broke my heart, but I thought she was gone.”

Washbrun, who has told local officials he and his wife would like to adopt Missy, said they understand why Ortolani originally left the dog, but add that because he never returned for her, his actions should be considered abandonment.

Ortolani said he had no choice.

“If the rescuers will not put their lives in jeopardy, it didn’t really seem all that wise o ask my friends and family to do the same, ” he said. Now, he reportedly wants the dog back.

Once Ortolani heads to court date on Oct. 16, a judge ultimately will decide who Missy can live with, Safe said.