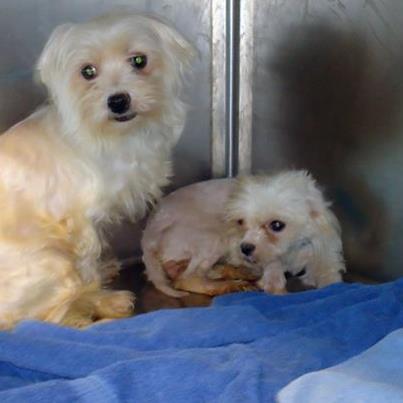 The Humane Society of North Texas is offering a $500 reward for information on who dumped 92 dogs along country roads in Denton County Monday and Tuesday nights.

The Humane Society believes both cases are related — probably the operators of a puppy mill who no longer want to breed the animals under a strict new state law.

“Unfortunately, there are a few of these really bad breeders who know they’re not going to pass inspections and are trying to get out of the business fast,” said Peggy Brown, coordinator of community outreach and education for the Humane Society.

The dogs rescued in Flower Mound are being housed in that city’s animal shelter.

All of the animals are filthy and may have lived under horrible conditions.

“Unfortunately, with a lot of these puppy mill dogs, their feet may have never touched the ground,” Brown said. “They could have spent their whole lives in cages.”

olunteers will bathe the animals in the next few days before putting them up for adoption.

“It’s really heartbreaking,” Brown said. “Hopefully, we can change their lot in life and give them a better future than their past has been.”

Anyone interested in adopting the dogs can contact the Humane Society of North Texas in Fort Worth at 817-332-HSNT or the city animal shelter in Flower Mound at 972-874-6390.