It is week 4 of #SDLive and guess what that means?! It is almost time for my television debut, YAY! For my first feature, I landed an interview with a world renowned surfing dog, Dozer which took place at Del Mar Dog Beach where he recently won the Surf Dog Surf-A-Thon, the worlds biggest doggy surf competition. Over the summer my goofy mutt Jack and I attended the event and witnessed Dozer literally bulldoze his way into the finals where I snapped the photograph below moments before he took first place! 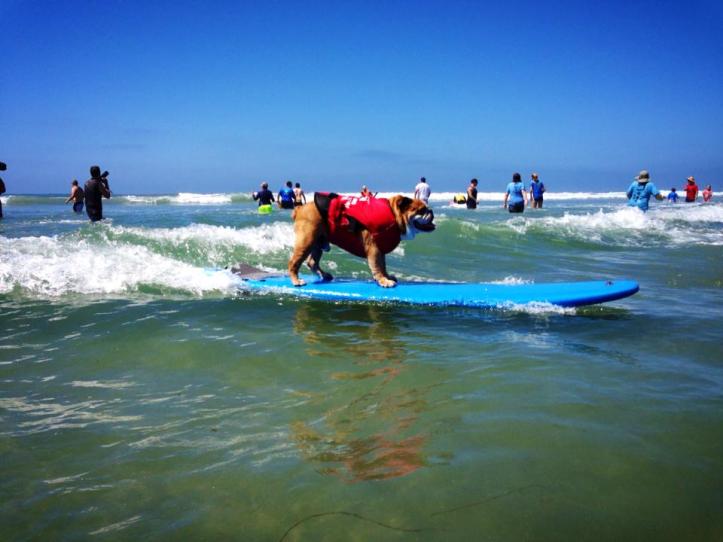 While I personally have been a fan of Dozer for years, I think I can speak for many when I say, “Who wouldn’t want to see a dog surfing waves??” which is why I knew this feature would be a hit to all kinds of people who enjoy true entertainment.

Beyond his handsome wrinkly face and adorably stout body, he had the most loving disposition– it was so charming! He really knows how to get cheeky with the ladies, because the wet kisses kept coming!

… AND don’t even get me started on his Mom and Dad…They are the epitome of real life dog parents and it is ridiculously adorable. His Dad Doug Hokstads is Dozer’s surfing coach and best friend. His lovely Mom-ager GiGi appears to be his front and center cheerleader through every moment of his life. Can I take a minute to praise them as dog parents of the year??? It is seriously adorable! Not to mention his friends from SO CAL SURF DOGS, the Southern California Club for Surfing Dogs of which Dozer is a proud member. They showed up to the shoot to show support for their all-star club athlete. Dale Porter, the club’s incredibly talented photographer and creator of Killer Image, has documented the majority of Dozers achievements and snapped this lovely photo of us at the shoot.

Dozer was incredibly vocal and would not stop barking during the interview. His parents assured the film crew it was not because he was upset, it was because he was excited to surf. Cute right?! We actually had to relocate several times around the beach to areas where Dozer could not physically see the waves to calm his anxiety so we could finish the interview. ❤

After finishing our Q&A, we unleashed the beast to catch waves with his dad, Doug. Dozer was so crazy-excited he literally raced to the ocean’s edge with his dad.

After just a few minutes in the water, Dozer caught his first wave with perfection and rode it all the way in! So cool right?? I can’t even get up on a surfboard, so the fact that he can stand up and ride smiling with poise all the way in was remarkable. After that, he caught practically every wave that came his way. It was awesome!

Dozer’s parents gifted me with a fun So Cal Surf Dogs baseball cap, plus they gave me a copy of one of his latest achievements– his new children’s book based on his life called Dozer Surfs … A True Dogs Tale. It is the story of how one dog comes from humble beginnings and finds the courage to overcome his obstacles and thrive at a skill set he was destined to dominate in, surfing.

The book is touching and will make a fantastic Christmas gift for kids and dogs!!! If you do not have pets, then you probably think I am crazy (true story, I am). But, my dog is my fur baby and often, YES, I am guilty of reading to him. Mostly the “Furry Finds” section of the San Diego Pets Magazine or the beauty and tips section of Marie Claire. Bah. The cutest part was when they had Dozer sign the book for me with his paw print on the inside cover, it was pawesome!

Tune into my television debut with Dozer the Surfing Dog on SD Live Thursday, December 5th at 10:00pm after the SDSU basketball game on the Fox Sports San Diego network. Woof! I am excited for my future Fido-friendly features for SD Live and am beyond grateful for the support from FOX Sports San Diego and the San Diego Pets Magazine. Thank you for believing in my passion for pets and inviting me to highligt the impressive athleticism of the all star dogs here in San Diego.

To learn more on Dozer vist his website Dozer Surfs… A True Dog’s Tale where you can keep up on all his competition wins, media appearances, and  purchase your Dozer Surfs children’s book. XO! Woof!