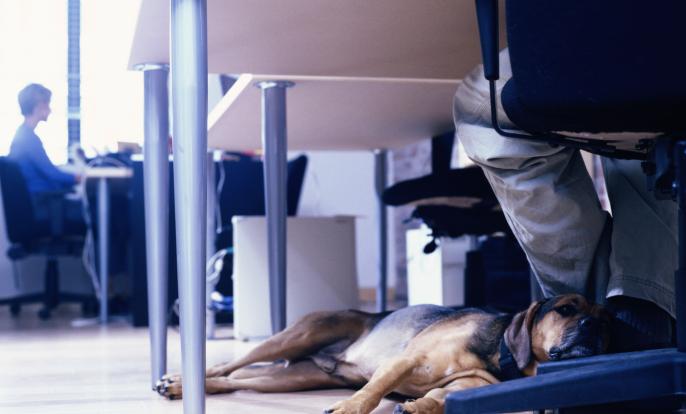 Bringing pet dogs to work can reduce stress and make the job more satisfying for other employees, a study suggests.

In 2013 US researchers found those with access to dogs were less stressed as the day went on than those who had none.

The preliminary study published in the International Journal of Workplace Health Management looked at 75 staff.

The researchers suggested access to dogs boosted morale and reduced stress levels, whether people had access to their own pets or other people’s.

The study was carried out by a team of researchers at Virginia Commonwealth University who looked at a manufacturing company where people are allowed to bring their pets to work.

They compared those who brought in their own pets, with those who had dogs – but left them at home – and staff who did not own pets.

Over a week, the researchers compared employees’ stress levels, job satisfaction and feelings about support from and commitment to the company. Talk about pooch power.

In the morning, there was no difference between the three groups.

But during the course of the work day, stress levels appeared to decline for employees with their dogs present and increased for non-pet owners and dog owners who did not bring their dogs to work.

The researchers also noted that stress rose significantly during the day when owners left their dogs at home compared to days they brought them to work.

Randolph Barker, lead study author and professor of management at the VCU School of Business, said dogs can make a positive difference in the workplace.

“The differences in perceived stress between days the dog was present and absent were significant. The employees as a whole had higher job satisfaction than industry norms.”

Prof Barker said having dogs around the workplace may contribute to employee performance and satisfaction.

And he reported positive comments from employees such as “pets in the workplace can be a great bonus for employee morale”, “having dogs here is great stress relief” and “dogs are positive; dogs increase co-worker cooperation.”

Past research has shown that stress can contribute to employee absenteeism and burnout. It can also result in significant loss of productivity.

Louise Lee, spokesperson at pet charity Blue Cross said they have always promoted the benefits of dogs in the workplace.

“We encourage our employees to bring in their well-behaved dogs where practical and we have seen similar results to the survey – a more enjoyable working environment, staff more likely to take regular breaks and a reduction in stress through stroking and petting dogs during the working day.

“The dogs themselves are also much happier as they are not being left at home for long periods of time.”

What are your thoughts on bringing Fido to work? Should 2013 mark the beginning of a newly accepted lifestyle? Would it ease your stress level at work?