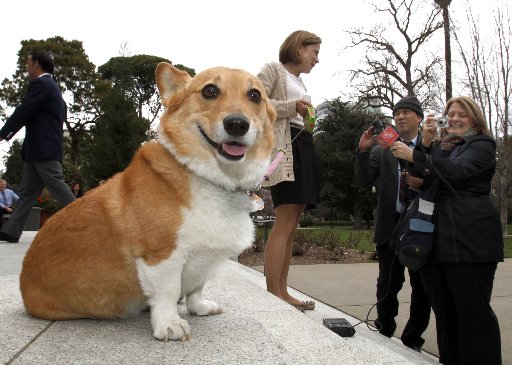 With polls showing voter sentiment over state Proposition 30 to be very close, Gov. Jerry Brown will put the fate of his proposed tax increases into the hands — well, paws — of a special campaigner in San Diego tomorrow.

Sutter, the governor’s Pembroke Welsh corgi, will visit volunteers at phone banks in San Diego tomorrow morning and Chula Vista in the afternoon.

“We’re unleashing our cutest and cuddliest secret weapon out into the field,” said Tenoch Flores, communications director for the California Democratic Party. “Across the state, Californians are lending a hand, and in some cases a paw, to the effort to pass Proposition 30 to stop the cuts to education.”

Sutter has been traveling for a few days now and is scheduled to complete his statewide tour in Sacramento Monday night.

If passed, the ballot measure would increase the state sales tax by 1/4 cent for four years and raises income taxes on Californians earning at least $250,000 for seven years.

Brown said there will be major cuts to education spending if the measure fails at the ballot box.

Proponents say the state’s richest residents can afford to cough up a little more cash, and the sales tax will still be lower than last year.

Opponents say the proposition doesn’t guarantee that they additional revenue would go to schools, and that the state government needs to get its fiscal house in order before coming to taxpayers and job producers for more money.

Recent polls have shown support for the measure slipping under the 50 percent mark. 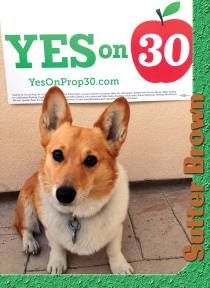