Jack sick with a swollen neck

Yesterday morning while walking Jack and observing him as I always do when we walk, I noticed the skin under his neck hanging lower than usual. The skin hung so low he could easily been mistaken for a bloodhound with that baggy neck flapping in the wind like that. Once we got into the elevator, I felt around the neck and noticed a big gold ball size air pocket type lymph node within the extra skin baggy skin. Being the overbearing worried, dog Mom that I am I rushed him back to the vet- yes back to the vet we visited with over the weekend ( all day Saturday ) the day of the Helen Woodward Gala. Apparently my brother my roomate for the rest of the summer also noticed this swelling. He said he just though Jack was growing a double chin … 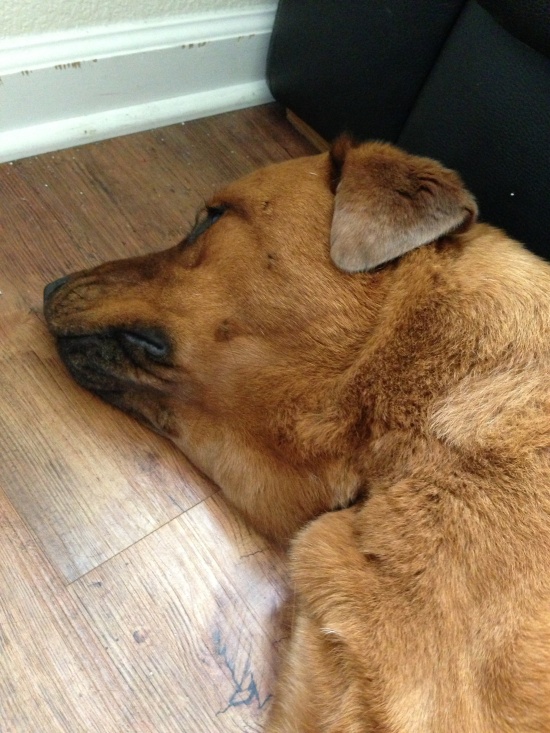 So over the weekend our doctor did a physical exam on Jack. They sedated him to check out the back of his throat and into his stomach as he had a slight cough the past few days and had been depressingly mopping around the house the past week. After heavy sedation nothing appeared to be in Jacks throat or stomach except for some grass found behind his tonsils. Not a fox tail or tennis ball rubble, which was good news. You can imagine the relief it was getting that piece of mind that he didn’t have anything stuck in his stomach or throat – well, we spoke too soon.

What the doctor didn’t notice was the abnormally huge air pocket under hanging under his neck which I brought to her attention when we returned this morning.

The doctor this huge swelling could be caused by several factors:

1) it could be from a rattle snake bite ( jesus really? how could I have missed that, bad mom 😦 )

3) a needle or something small that pushed itself into the skin, which in that case we will need to have specialists surgically remove it.

We will not know about option 3 until we get X-rays and even THEN the doctor doesn’t know if we can see it through an X-ray — F*%K the frustrations of having a sick pet. This condition could be expensive … Oh did I mention that Jack has already had a painful surgery? Yeah his bionic plated metal knees cost us a whoping $3k a knee for the CCL bilateral knee replacements. You’re welcome to read up on the production we went thru during that fiasco here on our blog post: Jacks TPLO Bilateral | Barking Beast San Diego.

Other possible suggestions my friend Rain shared was it could be an internal splinter caused by a wheat grass thorn. The wheat grass images you can see on the front of a box of wheat thins as she visually shared with me.

So… the next few days is a waiting game to see if this swelling goes down and it was just a reaction to a bite. If it does not go down we will haver to go ahead with those costly X-rays and possibly a financially unforgiving surgery to remove the culprit.

While Im optimistic our Vet knowns what she’s talking about … it’s always good to get a second opinion – which is when being in the Pet industry comes in handy. Barking Beast has happened to make personal friendships with two very established San Diego vets who will be checking Jack out on Wed for a second, and third opinion.

Whatever it is, and whatever it reasonably costs- I hope we can figure out whats going on with Jack and heal him. Its clear this condition is bothering him as he’s lost his appetite for eating and most of all playing, he never turns down a game of fetch. Lately he just mopes around the house or sits on the couch with his head down- obviously because he’s in uncomfortable pain. If only he knew as soon as he gets better he has a play date set up with his long lost brother and twin Ross. ❤

Thank you everyone for the support and warm wishes. We will keep you updated on Jacks condition. Xo