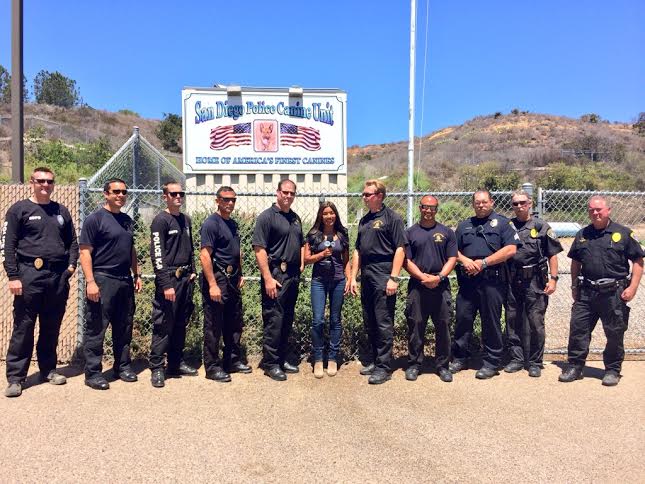 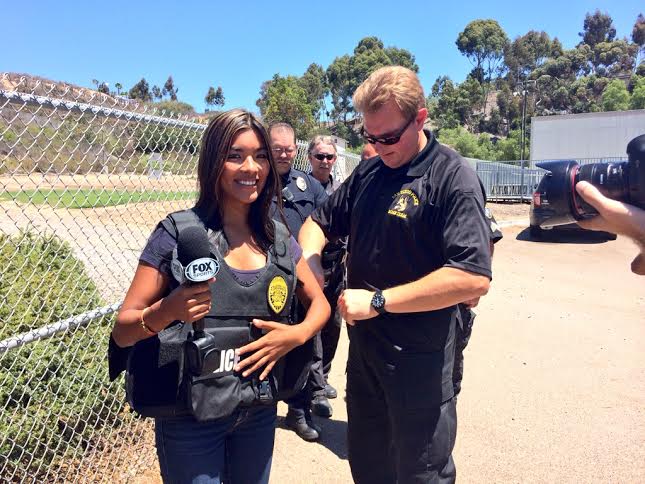 Last week I filmed with the San Diego Police Canine Unit as I went inside the world of the new tightened Qualcomm Stadium security and the SDPD canines who sweep the venue before home games with search tactics. For the first time on a #SDLive pet feature I was told to not bond and or play with the canines on set- you can imagine how hard this was for me as the German Shepard and Belgian Malinois looked so incredibly cute and cuddly. The feature is set to air September 2nd on FOX Sports San Diego.

During filming I learned how incredibly deep the love between Police Officer and K9 runs. In fact it was during the interview I learned anyone charged with the murder of a police canine faces that of the same charges one would if they took the life of an human officer. The loss of a police K9 has been articulated by many officers with a common statement “ It’s not like losing an officer. It IS losing an officer’”. Between all the training and risks that are expected of these dogs, I think its fair enough we charged the murderer of a police K9 with the equivalent of manslaughter? Right?

Regardless wether it’s a canine officer or just your everyday four legged furry friend waiting at the door step for your home arrival, losing a pet is never easy. The reality that, one day, you will have to say goodbye to your furry friend is one you never plan for, but accordingly should consider. During an extremely difficult time, it’s hard to find the feelings of security and relief in taking the appropriate steps for post life cremation. While our loved ones may be in heaven, they still remain very close in our hearts. That being said, our San Marcos friends Angel Paws Pet Aftercare realize there are several choices of pet aftercare when our beloved companions pass.

Angel Paws Pet Aftercare provides a diverse arrangements of cremation plan and option services. What makes Angel Paws so special is they also provide In Home Euthanasia services to accommodate every pet parents particular needs. “ Deciding when and where to euthanize your pet can be one of the most difficult issues a pet owner may ever have to deal with. It is a personal decision that can be stressful for both the pet owner as well as the pet. For this reason, many clients choose to have a veterinarian come to their home in order to perform the euthanasia procedure. This allows the pet owner (and family) to be together with their beloved animal in a place which is familiar to all. After the procedure is finished, your pet will be transported to our cremation facility with the utmost care and compassion. “ – Angel Paws Pet Aftercare

Angel Paws Pet Aftercare has partnered with several community veterinarians who understand the strong bonds which are formed between families and their animals. These veterinarians hold the same high standards that we do and we consider them to be men and women who conduct themselves in a professional and compassionate manner. If you are interested in their In Home Euthanasia Service, then please contact one of the veterinarians by clicking here.

Dan Settle is one of the owners of Angel Paws Pet Aftercare and brings with him a rich experience with animals. Prior to opening a pet cremation company, Dan had a 16 year career in law enforcement with the San Diego County Sheriff’s Department. He worked a variety of positions including K-9 handler and department K-9 trainer. Dan had the privilege of working with two canines while he was with the department. Their names were “Urk” and “Hunter”.Sadly, in the early morning hours of January 18th, 2003 Dan was ambushed by a suspect with a shotgun in the City of Vista. Dan, Urk, and an explorer ride along named Brenton Tracy were shot at by the suspect. Unfortunately, Urk was mortally wounded during the encounter and became the second canine in the department’s history to be killed in the line of duty. On March 31st, 2009 Urk’s name was added to the California Fallen Police K-9 Memorial located at UC Davis, which happens to be one of the premier veterinary medicine training schools in the United States. The memorial is called The Faithful Partner and stands proudly in a courtyard surrounded by veterinary training classrooms at the UC Davis campus.

Although Dan was ultimately forced to leave his law enforcement career due to a work related injury, he finds satisfaction knowing that he can assist others who find themselves faced with the same sense of loss of a beloved companion. Dan has raised the bar in the pet aftercare industry by Angel Paws a company which is trustworthy, credible, and dedicated to honoring the pets of each and every client he serves.

Angel Paws has refined the standards of the pet cremation industry to provide pet parents a peace of mind when they need it most. Settle, a pet owner all his life, understands the unique bond which can develop between pets and their owners. To learn more on Angel Paws owner Dan Settle click here. Be sure to visit Angel Paws Pet Aftercare to plan ahead for when Fido’s time comes. If you have a question, please call them at (760)-510-1010 and visit Angel Paws Pet Aftercare for more information.